Recently, we have provisioned a 10,000-node Grid Engine cluster in Amazon EC2 to test the scalability of Grid Engine. As the official maintainer of open-source Grid Engine, we have the obligation to make sure that Grid Engine continues to scale in the modern datacenters.

Grid Engine Scalability - From 1,000 to 10,000 Nodes
From time to time, we receive questions related to Grid Engine scalability, which is not surprising given that modern HPC clusters and compute farms continue to grow in size. Back in 2005, Hess Corp. was  having issues when its Grid Engine cluster exceeded 1,000 nodes. We quickly fixed the limitation in the low-level Grid Engine communication library and contributed the code back to the open source code base. In fact, our code continues to live in every fork of Sun Grid Engine (including Oracle Grid Engine and other commercial versions from smaller players) today.

So Grid Engine can handle thousands of nodes, but can it handle tens of thousands of nodes? Also, how would Grid Engine perform when there are over 10,000 nodes in a single cluster? Previously, besides simulating virtual hosts, we could only take the reactive approach - i.e. customers report issues, and we collect the error logs remotely, and then try to provide workarounds or fixes. In the Cloud age, shouldn't we take a proactive approach as hardware resources are more accessible?

Running Grid Engine in the Cloud

In 2008, my former coworker published a paper about benchmarking Amazon EC2 for HPC workloads (many people have quoted the paper, including me on the Beowulf Cluster mailing list back in 2009), so running Grid Engine in the Cloud is not something unimaginable.

Since we don't want to maintain our own servers, using the Cloud for regression testing makes sense. In 2011, after joining the MIT StarCluster project, we started using MIT StarCluster to help us test new releases, and indeed the Grid Engine 2011.11 release was the first one tested solely in the Cloud. It makes sense to run scalability tests in the Cloud, as we also don't want to maintain a 10,000-node cluster that sits idle most of the time!

Requesting 10,000 nodes in the Cloud
Most of us just request resources in the Cloud and never need to worry about resource contention. But there are default soft limits in EC2 that are set by Amazon for catching run away resource requests. Specifically each account can only have 20 on-demand and 100 spot instances per region. As running 10,000 nodes (instances) exceeds many times the soft limit, we asked Amazon to increase the upper limit of our account. Luckily the process was painless! (And thinking about it, the limit actually makes sense for new EC2 customers - imagine what kind of financial damage an infinite loop with instance request can do. In the extreme case, what kind of damage a hacker with a stolen credit card can do by launching a 10,000-node botnet!)

Launching a 10,000-node Grid Engine Cluster
With the limit increased, we first started a master node on a c1.xlarge (High-CPU Extra Large Instance, a machine with 8 virtual cores and 7GB of memory). We then started adding instances (nodes) in chunks - we picked chunk sizes that are always less than 1000, as we have the ability to change the instance type and the bid price with each request chunk. Also, we mainly requested for spot instances because:

All went well until we had around 2,000 instances in a region, and we found that further spot requests all got fulfilled and then the instances were terminated almost instantly. A quick look at the error logs and from the AWS Management Console, we found that we exceeded the EBS volume limit, which has a value of 5000 (number of volumes) or a total size of 20 TB. We were using the StarCluster EBS AMI (e.g. ami-899d49e0 in us-east-1) that has a size of 10GB, so 2000 of those instances running  in a region definitely would exceed the 20TB limit!

Luckily, StarCluster offers S3 AMIs, but the OS version is older, and has the older SGE 6.2u5. As all releases of Grid Engine released by the Open Grid Scheduler project are wire-compatible with SGE 6.2u5, we quickly launched a few of those S3 AMIs as a test, and not surprisingly those new nodes joined the cluster without any issues, so we continue to add the instance-store instances, and soon achieving our goal of creating a 10,000 node cluster: 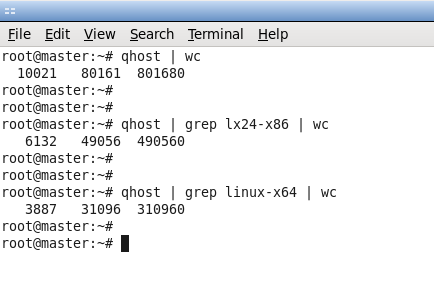 HPC in the Cloud
To put a 10,000-node cluster into perspective, we can take a look at some of the recent TOP500 entries running x64 processors:
In fact, a quick look at the TOP500 list, we found that over 90% of the entries have less than 10,000 nodes, so in terms of the raw processing power, one can easily rent a supercomputer in the Cloud and get compatible compute power. However, some HPC workloads are very sensitive to the network (MPI) latency, and we believe dedicated HPC clusters still have an edge when running those workloads (in the end, those clusters are designed to have a low latency network). It's also worth mentioning that the Cluster Compute Instance-type with the 10GbE can reduce some of the latency.

Future work
With 10,000 nodes, embarrassingly parallel workloads can complete using 1/10 of the time compare to running on a 1,000-node cluster. Also worth mentioning is that the working storage required to place the input and output is needed for 1/10 the time as well (eg. instead of using 10TB-Month, only 1TB-Month is needed). So not only that you get the results faster, but it actually costs less due to reduced storage costs!

With 10,000 nodes and a small number of submitted jobs, the multi-threaded Grid Engine qmaster process constantly uses 1.5 to 2 cores (at most 4 cores at peak) on the master node, and around 500MB of memory. With more tuning or a more powerful instance type, we believe Grid Engine can handle at least 20,000 nodes.

Note: we are already working on enhancements that further reduce the CPU usage!